A Calorie Chart is Better than a Calorie App 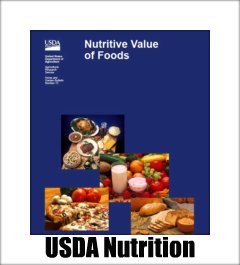 This could probably be considered the original calorie food chart. I remember getting my first copy of this chart in the form of a very large book (the size of a large atlas) when I was in Food engineering Graduate School in 1980. 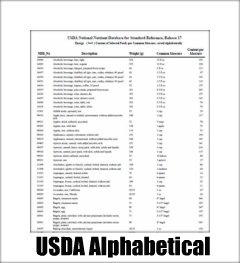 This is a shorter version of the USDA information in alphabetical order. It may be better for looking up how many calories are in a specific
food, but it is not as good at other things such as: Which vegetable should I eat tonight? In other words this kind of chart takes the place of a calorie app. It is a little bulkier than an app, but you can start to compare and see patterns a bit. If you do not use an app this would be a good chart to have along with a couple of the other charts. USDA calories in alphabetical order. 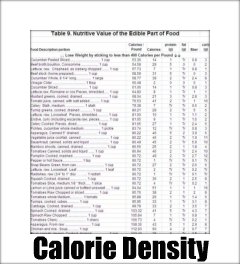 This chart uses data from the USDA, but calculates the calories per pound. According to the Pritkin Principle, if you want to lose weight you should average eating food that is less than 400 calories per pound. He says it does not matter how much you eat.

To get this chart either click here: Calorie Density Chart
« or click the picture to the left. 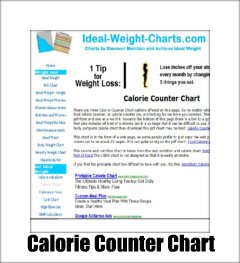 Try out this my first page to talk about the various charts for calories. Many people have told me that they thought it was the best page on the internet for calorie information. Go to my calorie counter chart webpage.

For one serving of a food, a GL (glycemic load) greater than 20 is considered high, a GL of 11-19 is considered medium, and a GL of 10 or less is considered low. Foods that have a low GL in a typical serving size almost always have a low GI. Foods with an intermediate or high GL in a typical serving size range from a very low to very high GI. I did not build this page, but it was the best page I could find on the subject. This information is useful, but do not get carried away. Calories still rule for weight loss, low glycemic foods just stay with you a little longer. (Also remember that when you mix proteins with starch such as in a meal setting, the foods last a little longer.) 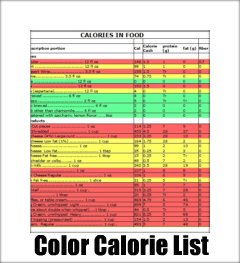 I have heard several people say "Just tell me what foods to eat and which foods to avoid. " I wish it were that easy, but according to Professor Haub of Kansas State University he was just as likely to lose weight by mostly eating junk food. Once again science seems to show that it is mostly about calories in and calories out. So take my suggestions as to what to eat and what not to eat with a grain of salt. Color Calorie List. 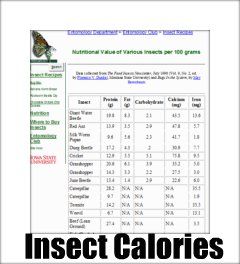 OK, why not have a little fun with this calorie thing; besides if I had to survive in the jungle, It would be a lot easier to catch a grasshopper than a rabbit. Sorry I do not have any recipes to give you.


I used the data from the above site to calculate the calories of Insects in this chart: 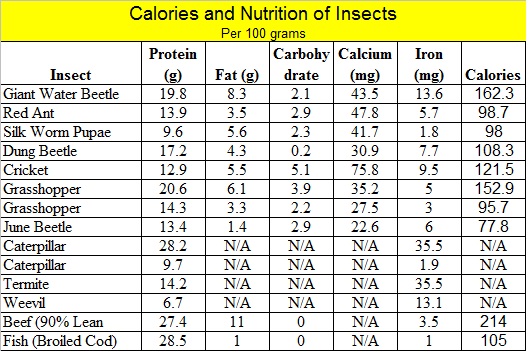