If we look to our past to determine the ideal body shape of men and women, we may not only learn about being in shape, but also learn about who we are as humans.

According to a paper published in the Journal of Human Evolution, homo sapiens excel at running long distances.

The results of the research support earlier findings that long-distance running in Homo sapiens evolved over two million years ago and probably helped early humans in hunting before spears began to be widely used about 400,000 years ago. The ability to run long distances in hot environments is thought to help in running prey to exhaustion. Neandertals lived in colder climates and probably needed different skills in hunting.”
When it came to brute strength, the muscular Neanderthals had a clear advantage.
Did you know that in places like the bush in southern Africa, people can still run animals to exhaustion.

Dennis Bramble, a biology professor at the University of Utah, says human running ability is often underestimated. "What's important is combining reasonable speed with exceptional endurance," he said.
The study notes that athletic humans can outrun horses and antelopes over extremely long distances. In parts of Africa this technique is still used today by hunters to exhaust their prey.
Why Run?
Bramble added:
“So why did early humans run when they could walk?
Because they sought protein provided by meat, marrow, and brain, said study co-author Daniel Lieberman, anthropology professor at Harvard University.
He said, "What these features and fossil facts appear to be telling us is that running evolved in order for our direct ancestors to compete with other carnivores for access to the protein needed to grow the big brains that we enjoy today."
Some scientists have suggested that endurance running was used for pursuing animals before spears, arrows, nets, and other hunting tools were invented. Later it may have been employed by hunters to exhaust their prey, allowing them to get close enough to use projectiles.
This strategy is still used by the San Bushmen of southern Africa to hunt herd animals like the kudu antelope.
However, Lieberman adds, "There is very little observational study of this behavior, largely because researchers can't keep up with the hunters!"
Another possibility is that humans used their swift feet to reach dead mammals before other scavengers. Lieberman said they would have followed clues such as vultures circling in the distance” 2


In a word, the ideal weight of runners or ideal body shape of runners is thin. Here are the BMI values of some past runners: 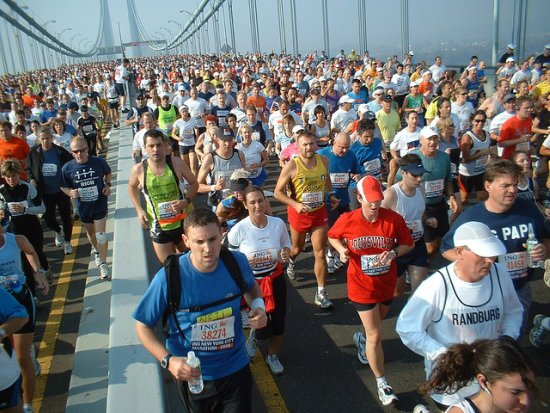 Ever notice that in a race like this, that they all look like they have an ideal body shape?